The Greek Island of Halki Where the Adventures Started

We (the Bear Family) have a particular affection for Halki as it was the first destination in Greece that we went to, and there fell in love with all things Greek. Way back in 1989 there were hardly any tourists, with the only package style holidays provided by the specialist operators, Laskarina.

Halki (Greek: Χάλκη; Chalki, Khalki, also Chalce) is one of the smallest inhabited islands in in the Dodecanese group very near Rhodes.

There are about 300 permanent residents somewhat boosted by itinerant tourists.

It was once a sponge fishing centre but it takes its name from the Greek for copper (Halkos, χαλκού) which was mined there.

Well that's a few fact and figures out of the way.

The best thing about the island is that there is little to do and see ...

So if you want an exciting active holiday choose another brochure. However if you want to loaf around reading, swimming, eating and drinking in an idyllic unspoilt Greek Island then Halki is the place for you. 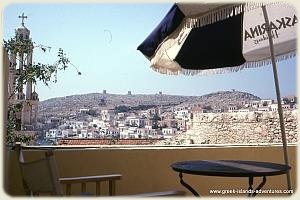 View from our patio

We stayed in a small apartment just behind the Byzantine church Agios Nikolaos in the capital and only village, Emborio.

Emborio surrounds the harbour like a classic amphitheatre so we had good views all around and across to the windmills. 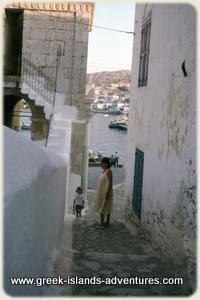 Path from Villa to Harbour (and bread shop)

It was a very safe place.

We sent the Daughter (then only 5 years old) to go and buy the breakfast rolls and croissant from the traditional bakery on the harbour front.

Daughter spoke no Greek and the old lady in the shop spoke no English, but with true Greek φιλοξενία (hospitality to, or love of, strangers) she put Daughter at ease.

Recent discussions with Daughter have uncovered the secret. She apparently pointed at the required item and then held up a number of fingers to indicate how many.

At the end she held at her hands full of Greek coins (Drachmas then) and the lady took the exact amount. 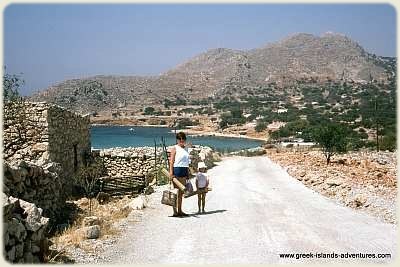 Most of our time was spent on Pondamos beach which is a 10 minute walk from the harbour over a little hill. That doesn't sound much but in the heat of mid August it seemed like miles. Especially coming back!

In the picture, you can just see Kastro, the old crusaders Knights of St John castle at the top of the mountain on the right. 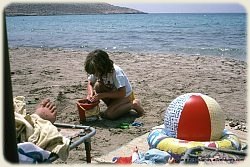 Pondamos beach is the only really only sandy one. It has beach beds, umbrellas and a taverna.

No water sports other than those you can provide yourself. Take your own bucket and spade!

The road past the beach continues up to the abandoned village of Chorio. It used to be the capital of Halki with several 1000's population. It was built inland and hidden from the sea as protection against marauding pirates. 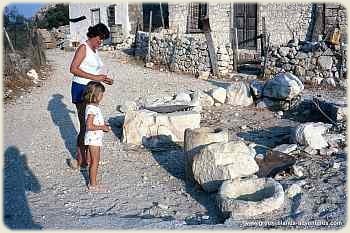 It is possible to walk up there but I don't recommend doing it in August, unless you want to train for a trans-Sahara marathon. These days there is a taxi or mini bus which can get you there but back in 1989 those luxuries did not exist.

There was one pick up truck owned by a local and he gave us a ride in the back. Fortunately the road up was paved otherwise we might have been a bit saddle sore.

There were plenty of abandoned containers which we guessed were for grinding. But we're not archaeologists. 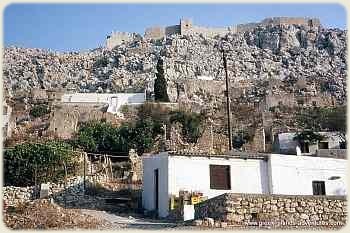 View of Kastro from Chorio

The early villagers must have felt somewhat safer with an impressive castle just above them. 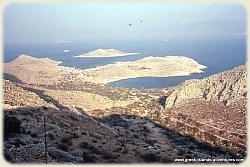 You can see how much hotter,drier and more barren the southern Dodecanese Islands are compared with the lusher northern islands e.g. Paxos in the Ionian.

Water is very scarce in Halki. Any rainwater is collected in cisterns but during the summer, water ships are regular visitors to top them up. 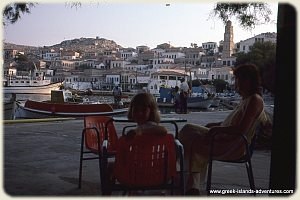 Best of all though is in a nice cool taverna having a drink.

So apart from one trip up the mountain and many days on Pondamos beach, what else did we do in Halki? you may ask.

A local, probably a fisherman, took us on a ½ hour trip to the next beach and left us there with the promise that he would be back at 4 o'clock to pick us up. We had a grand solitary day with nothing but sheep and goats for company.

Unfortunately one was dead so the place became known to us as ... 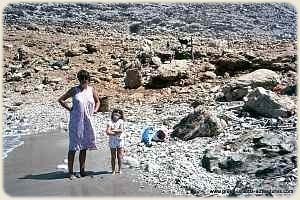 If you look carefully you can see our (live) company.

Well, after a bit of skinny dipping, the fisherman (we were swimming not the fisherman!) came back as promised and we lived to tell the tale.

We also went on an organised beach party to neighbouring Alimnia island. In fact we went twice! It got kind of mysterious on the second visit as it is a deserted island and was getting dark.

I hope that has given you a flavour of our first adventure in the Greek Islands. Halki is a great, away from it all, island and a perfect place to relax.

Perhaps the lack of major tourist spots, extra heat and difficulty in getting there will help protect it from becoming too overdeveloped. I hope so.

There is now one taxi and a mini bus that can take you to the vast (ahem!) choice of destinations. Also an ATM where you can get lots of money to spend in the shop. Or tavernas - a much better idea.

No hire cars just peace and quiet. Maybe not so much now as when we went. I gather that more British tourists seem to be there. If we went again maybe we'll learn to speak Welsh and be anonymous!

Unfortunately you can no longer use Laskarina for your travel arrangements but two of their former reps started their own company, so give Nissia Holidays a visit.

Back to Dodecanese from Halki

Back to Greek Islands from Halki