The town is entirely modern in the sense that it was completely rebuilt with the help of the British after the major earthquakes in Kefalonia in 1953.

However, that said, it is still a very pleasant place to stay as we know since we dropped in on our flotilla sailing holiday.

It is one of the main ferry port for Kefalonia serving Corfu, Ithaca, Patras and Italy., but the big ferries now remain outside the main harbour

Although not a major resort in its own right, The Melissani Lake and Drongorati caves are very nearby and so there is a steady stream of visitors. There is also the small lake of Karavomylos nearby where the subterranean waters from the Katavothres near Argostoli finally re-emerge.

There are a number of tavernas and shops but there is not a lot else going on. Except for the busy period when the ferry arrives and there is much coming and going for about 30 minutes until all the trucks and people have departed for their destinations

Nearby was the location for much of the filming of Captain Corelli's Mandolin in 2000. They built an mockup of old Argostoli in the town sqaure but this has since been removed (In fact I think it was destroyed as part of the battles in the film). Apparently no modern yachts were allowed in the bay lest they appeared on film. Lucky we werent sailing then!

There is a relatively new quay which gives good protection from the prevailing conditions. It is of an interesting design, in that it has archways just about at sea level which allow water to circulate, keeping the harbour fresher than usual. It must have been decided that an open arch however allowed too much swell through, so now they are filled with rocks. This still allows water through but not at a yacht disturbing rate.

We arrived at Sami by Yacht. It sounds very grand but we were on our first sailing flotilla holiday.

We had sailed from Aghios Evphemia which was just across the bay, it would have taken something like 20 minutes by road or even 45 minutes under power in the yacht.

However by the time we sailed and visited Anti-Samos bay, it took us 5 hours. But that is what messing about in boats means. 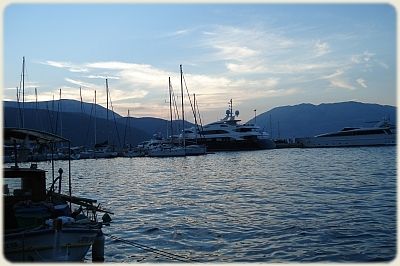 As the harbour was fairly large there were plenty of interesting craft around.

We never really had any bother with ferry arrivals even though it was August high season. 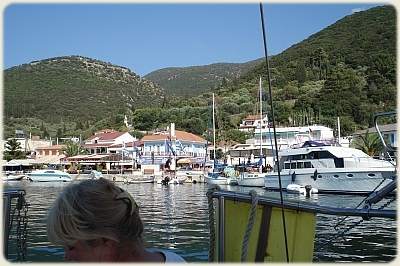 It is a wonderful place to sit in a quayside taverna and watch the world and the boats go by. 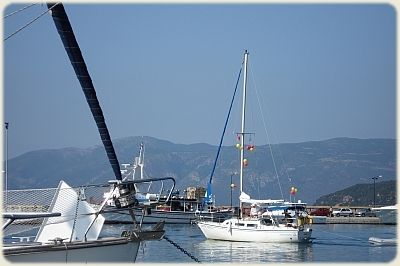 The harbour walls provided a pefect place for a 16th birthday party for one of the girls on another Yacht.

We took a rather jerky video from our quayside taverna. It gives you an idea of the place but it won't win any filming awards...

Back to Kefalonia from Sami

Back to Greek Islands from Sami