The Dodecanese Islands Our First Taste of Greece

The Dodecanese Islands are the southernmost group of Greek Islands. Way down in the south-east of the Aegean Sea, just off the coast of Turkey.

In fact they are nearer Turkey than Greece!

The most southerly ones are strictly speaking in the Mediterranean sea.

The tiny island of Halki, near Rhodes, was where we had our first Greek adventure as a family. We went on a package (more a small parcel really) holiday with a company called Laskarina.

The weather is typically hot southern mediterranean. In fact it can get pretty hot in places in the summer but the Meltemi wind can help to cool things down a bit.

What's in a Name? 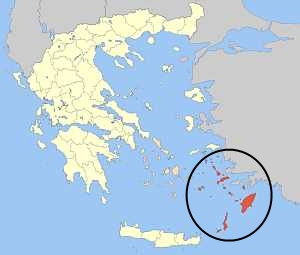 In antiquity the islands were called the Southern Sporades.

During the middle ages they acquired their present name of Dodecanese, which literally means "Twelve Islands" from two Greek words:

The twelve are those that were given special privileges by the Turkish rulers.

There are a total number of 163 Dodecanese Islands, 26 of them are inhabited. The actual total figure seems to vary though.

Have all islands got names?

I'm sure they have and I hope to find out.

1912 - End WWII: by Italy referred to as Islands of the Aegean

Eastern and western cultures have blended for many centuries and as a result there are loads of Byzantine churches, Crusaders' Castles and traditional villages.

The most popular (i.e. busiest) tourist destinations are Rhodes, Kos and Patmos, while the unspoilt Symi, Halki, Leros and Kalymnos are not too crowded.

Rhodes has plenty of night-life, maybe not to everyone's taste, especially in the media notorious Faliraki. Kos isn't far behind.

But most of them are ideal places to experience traditional, serene island life.

There are strong and often unpredictable winds in the area and so it is great for advanced sailing. Not for beginners then, so back to sailing school.

Island hopping is very popular as islands are often less than an hour away from one another by ferry. All islands have their own character and attractions and I hope to cover a number of them in other pages.

All of the major Dodecanese islands are accessible by a ferry service from ports in Greece and Turkey and there are a variety of inter-island ferries.

The islands of Karpathos, Kos and Rhodes have international airports with regular flights to and from other European destinations.

As I said somewhere above all those facts and figures, the Dodecanese was where we first had a Greek holiday as a family. Have a look at Halki to see some of our pictures from 1989.

We also made a visit to neighbouring Alimnia, a deserted island, ideal for secluded beach parties.

Back to Greek Islands from Dodecanese Islands