The Island of Crete Hot and Fascinating

The Island of Crete was the destination for the Bear family in 2002. We had not seen the sun for some while (it is a rare sighting in England!) and Mrs. S wanted some heat.

She certainly got it in Crete!

It was a brief but eventful adventure and it was all recorded in the diary that the Daughter wrote at the time.

The Island of Crete adventure started with the usual dawn raid on the motorway to Gatwick, long queues at check-in and breakfast in the departure lounge. It was all worth it though. The flight itself was a major success as the pre-ordered vegetarian meal arrived. Monarch airlines are pretty good at that.

Drinks on board were the ubiquitous Champagne for Mrs. S, Bacardi and Coke for Daughter and plain coke for me (I'm not a great fan of flying - very uncivilized - and it's worse if you have a fuzzy head)

We kept looking out the window trying to identify all the other islands we had visited on previous adventures. But to no avail.

Arrival at Island of Crete 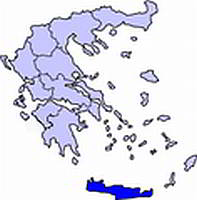 The Island of Crete

The taxi ride from Chania airport to Almeritha was quite long and passed through considerable industrialised areas. Our hearts sank as it didn't look too pretty and we had thoughts of ending up in a busy town for our stay. 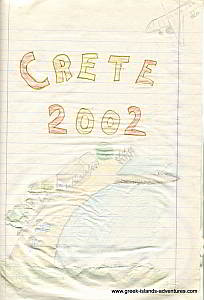 Not at all what we thought the island of Crete would be like. We should have had more faith because we ended up in a very nice little coastal town.

Daughter was impressed by the Greek driving techniques with overtaking on blind bends being quite normal. I believe that the white lines along the middle of Greek roads are intended as useful guides to straddle and are not intended as indications that it might be better not to drive on the wrong side of the road.

We booked through Simply Crete and stayed in Villa Artemis on the hill just on the edge of Almeritha.

The villa was great but the local rep. was not one of the most enthusiastic that we have met.

After a quick settle in we went for a walk round the town for provisions, back to villa for shower, drinks on balcony and then down to a taverna right by the sea. 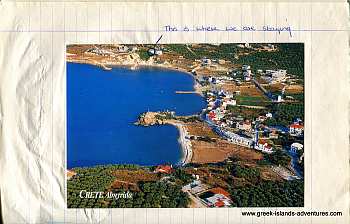 Our first Greek meal on the island of Crete was, as ever, Saganaki, Tzatziki, gigantes, Greek salad, souvlaki and spaghetti bolognese (Daughter was still in her spag. bog. period). Finished with watermelon and free fire water and cake.

We soon fell into a routine of breakfast on the balcony with croissants, juice and camping coffee, followed by a lazy day on the beach broken up by spending a delightful hour or so for lunch in a beach taverna.

Then in the evening back to the villa for showers and drinks on the balcony and then out for supper.

Another treat we enjoy on the beach is to buy those huge doughnuts from the sellers that walk along the beach.

We love the no hassle way they sell their wares, just strolling along holding a huge tray of great sugary doughnuts. Lucky the sea is nearby to rinse off afterwards.

Our villa was up on a hill and had great views overlooking the town and the sea.

The sunset views and occasional shooting star made the evening drinks and snackettes absolutely idyllic.

The waiters in the tavernas were all very enthusiastic and always wanted to make sure everything was just right. They were very keen on giving us presents at the end of the meal. (Hence the cake and fire-water which is best to avoid if at all possible).

There was a kind of beach club in the town where a French sailing group were learning all sorts of sea sporting skills. This was before we caught the sailing bug but it was still interesting watching all the action.

One evening we had personal entertainment at our taverna when a guitar toting Greek man went round the tables serenading the diners with extracts from 'South Pacific' not exactly 'Island of Crete' but at least it relates to islands, sea and sun.

He had a little pot attached to his guitar and which was pointedly put on the table if you were a bit tardy with a donation.

At least we could get rid of all the 'shrapnel' in our pockets.

From past trips we have always found that a good way to learn about a new place is to take an organised coach tour and then go an revisit using a hired car. We chose the Hidden Crete tour which took us to ancient sites, churches and mountain villages of the island of Crete. It took in Ancient Lappa and the fresh water lake at Kournas. 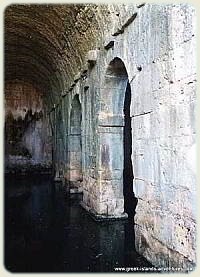 The ancient city of Aptera is quite an amazing place. There are still Roman aqueducts and water cisterns, baths and saunas to be seen.

The little church was still in use with a bell with the unlikely name Aston Hall. There is a story there somewhere but we forgot to note it down.

Our guide was a wonderful Cretan lady named Chryssa. She was a veteran of the Greek resistance during the Second World War and she gave us personal first hand knowledge of the Aponkoronos region of west Crete.

She also told us about numerous people she knew, and brought the recent history of the island of Crete alive for us.

Our Cretan guide told many fascinating and amusing tales from her time in the Greek resistance during WWII on the island of Crete.

One particular story was about a friend of hers who worked in the German cemeteries. At his retirement he was given a party by the German Commander. During the party the Commander said to him "George, after all these years in the cemeteries you still will not speak a word of German" to which George replied "I have been here 18 years looking after thousands of Germans and during that time not one of them has spoken to me!".

Also she knew a famous Greek resistance fighter form the days of WWII. His name was George Psychoundakis and he acted as a runner for the British. As he knew the mountains so well he was able to carry intelligence and messages without being detected. He wrote a book about his experiences. His book was translated by Patrick Leigh-Fermour, with whom he worked,  and published as The Cretan Runner. It is a good read and gives a wonderful insight into Cretan life during those days ...

The stop for lunch was a taverna in the mountains with loads of greenery and cooling waterfalls. It wasn't typical of the surrounding countryside but a welcome break from the heat.

After lunch we stopped at the fresh water lake. We weren't overawed so we spent time having a beer or two in the taverna instead. What else!

It was getting even hotter in the mountains so it was with some relief that we returned to the cooling breezes down by the coast. Altogether a wonderful day made special by our guide Chryssa.

We later hired a little car to revisit some of the places we saw on our coach tour and maybe visit the top of the Samaria Gorge. In true Greek style the booking hour was confused and the car was still needing a wash when we arrived ...

We drove to Chania had a good look round the harbour and purchased the mandatory souvenirs of pendants and earrings which pleased two thirds of the Bears. It was starting to get very hot and by the time we returned to the car it was roasting.

Luckily (or so we thought!) we hired a car with air-conditioning so on it went ... at full blast!

On reflection this was not such a good idea ...

We drove out of Chania and through Laki up into the mountains. The trouble was that the A/C took so much power from the tiny engine that it started to cough and splutter and finally died at the top of a winding road. Luckily it was near a taverna and we decided to abandon the car and go for lunch. We were a bit tense whether the car would start again but after the lunch rest it was off. Phew!.

We were not sure if the little car could take any more mountain climbing so we took the easy option and headed back down to the coast which turned out to be the busy area we first went through on arrival. 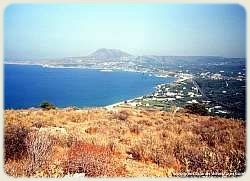 Must get a decent map next time.

So we went to have another look at the Turkish fort instead and admire the view down to Almeritha.

If we had binoculars we could have seen our villa, but we weren't that well prepared.

The final night on the island of Crete was very hot with a wind straight off the Sahara. Mrs. S. made the never heard before statement: It's too hot.

We never did get to the Samaria Gorge but that was just as well as it was rather hot and it would have been an exhausting walk. It sounds a great place for a Spring or Autumn walk though.

Likewise we missed Knossos Palace and Heraklion as we were only there for a week. Add those to the must do next time list.

The final drive back to the airport was possibly even more scary than the one out. We studiously studied the view all the way to avoid being aware of the taxi driver's techniques.

The Island of Crete deserves a lot more than a week but we had a great time and loads of heat!

Back to Greek Islands from Island of Crete