Halcyon Days
Not Such a Myth!

Halcyon Days has a modern day meaning, based on a Greek myth.

Our recent experience in Corfu makes us believe that the myth may not be so unbelievable.

The dictionary definition of Halcyon Days is a fourteen day period around the winter solstice, around 21st December, supposedly when the Halcyon (Kingfisher) is brooding.

It commonly means a period of peace and calm and can also be used as a term to harken back to an earlier time remembered as idyllic. 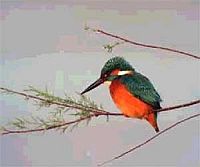 Halcyon is also a genus of tree kingfisher, a term derived from the myth.

In mythology it is believed that the Halcyon breeds on a floating nest at sea during the winter solstice, charming the wind and waves into a state of calm.

To paraphrase a Wikipedia article (http://en.wikipedia.org/wiki/Alcyone):

The name originates from the Greek Alcyone (Αλκυόνη) a Goddess who was the daughter of Aeolus (Αίολος), either by Enarete(Ἐνάρετη) or Aegiale(Αἰγιάλη). She married Ceyx(Κήϋξ), son of Eosphorus(Ἓσπερος), the Morning Star.

They were very happy together in Trachis, and according to Pseudo-Apollodorus's account, often sacrilegiously called each other "Zeus" and "Hera". This angered Zeus, so while Ceyx was at sea, consulting an oracle, the god threw a thunderbolt at his ship. Ceyx appeared to Alcyone as an apparition to tell her of his fate, and she threw herself into the sea in her grief. Out of compassion, the gods changed them both into halcyon birds, named after her.

The myth is described by both Ovid and Hyginus who also make the metamorphosis the origin of the etymology for "halcyon days", the days in winter when storms never occur. They state that these were originally the days each year (either side of the shortest day of the year) during which Alcyone (as a kingfisher) laid her eggs and made her nest on the beach and during which her father Aeolus, god of the winds, restrained the winds and calmed the waves so she could do so in safety.

Hence the modern meaning of the phrase to describe a peaceful time generally.

Various kinds of kingfishers are named after the couple, in reference to the metamorphosis myth: 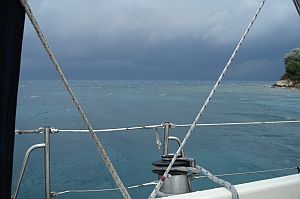 While we were on a recent sailing holiday around Corfu we had a very stormy first night.

On the following day while it was still lashing down with rain we looked out of the window... 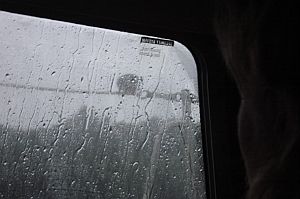 taking a bit of a breather on the guard rail, was a Halcyon.

The rain was too heavy to see exactly what variety but there was no mistaking it for anything other than a kingfisher. 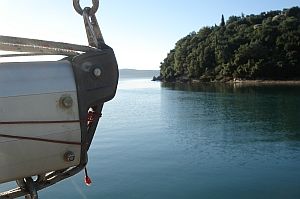 Eventually it departed back to the shore and lo! the storm started to ease and the remainder of our holiday was all peace and calm.

Not totally to plan as not much sailing could be done, but the whole experience makes you think.

Did the Goddess Alcyone visit us?

Perhaps the ancient Greeks knew a lot more about Gods than we think!!

Back to The Myth

Back to Greek Weather from Halcyon Days

Back to Greek Islands from Halcyon Days