Once we decided that we wanted to learn to sail by going on a sailing flotilla holiday the next step was to choose where to go and who with.

That was a pretty exciting adventure in itself. We kept to-ing and fro-ing between a number of sailing flotilla holiday websites and narrowed it down to three:

So we sent off for brochures and snuggled by the winter fire to peruse the contents. Our favourite was Sailing Holidays.com as they seemed to have a more friendly laid back company and a good choice of sailing flotilla holidays. Also they were the ones that we saw in Lakka and got us keen on the idea. Click here to read about it

The relaxed style was emphasised when we phoned to make a booking for a flotilla in the South Ionian.

They asked what experience we had, and when I said

'None apart from a dinghy ride years ago'

the guy on the phone replied

'No worries, you'll pick it up in no time' 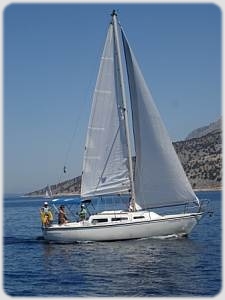 The yacht was an old-ish Jaguar 27 from the 1980s but converted for couples with a bigger fore cabin and more space.

Perhaps we needed to know a bit more about sailing before we go? The Daughter thought so and gave us a book on dinghy sailing. I learned everything from that ...

The pre-holiday bumph from Sailing Holidays suggested that a suitcase was not a good idea so off to TK Maxx to buy a new floppy, wheelie bag. It was pretty big so we could pack loads of unnecessary stuff. Click here to see our lists of what to pack.

We were constrained to going during the school holidays as Mrs S was in education, so August it was.

Anyway the following is a sort of diary of our holiday on a sailing flotilla in the greek islands to let you know how we did on our first sailing adventure. The dates are those on which we stayed that night at the various places

We set off very early for the airport some 3 hours motorway drive away. It's really exciting, driving through the dawn at the start of a holiday adventure, even though Gatwick is involved.

The check in and flight was uneventful and we landed at Aktion airport near Preveza all ready for our adventure. Hooray !! Isn't getting off the plane great? A blast of hot air with all the smells of a hot country. We're in Greece again ... brilliant.

There was a brief panic when every one else had their luggage and we were still waiting. We eventually got our bags, why are they always the last on the carousel?

We found the Sailing Holidays reps outside the terminal building with welcome bottles of water, and got on the coach for Sivota.

The rep warned us of a slight delay in the journey to the sailing flotilla base as we had to cross the Lefkas canal but the swing/lift bridge had broken down. This resulted in a bit of a queue to the temporary replacement. In true Greek style, nothing is a problem so they used a roll on-roll off ferry to act as a bridge!

Kassos by the Taverna

Once we arrived at Sivota we met our lead crew:

They showed us to the good ship Kassos which was to be our home and transport for the next two weeks. A quick settle in and then to the adjacent taverna (10 feet away) for the first cold greek beer. Always the best.

On the first full day we had our morning briefing and instructions on how to  use the yacht. Essential as, up to now, we were only able to recognise the pointy and blunt ends. However it is all made easy as all the ropes were colour coded, the anchor winch was electric and navigation equipment minimal.

The bad news was that we were to be harbour bound due to predicted high winds. 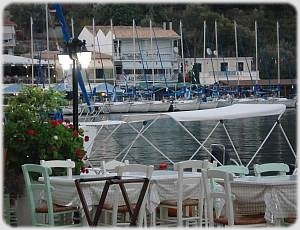 However this was not really a problem as it allowed us more time to prepare ourselves for the scary event of actually sailing all on our own.

Also we were able to explore the delightful harbour and have a few beers looking across at the flotilla moored outside the Ionian Taverna which served the best tzatziki in the world. 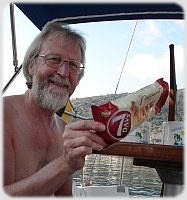 Some provisioning for the voyage was required so we did some shopping and bought supplies including the ubiquitous 7-day croissants which are an essential part of our Greek breakfast.

They are quite inedible but it is a tradition that we cannot break !

Today we had a proper morning brief, a word which perfectly describes what we had. Basically it was a rough idea of the wind, where might be a good place to stop for lunch and where we are aiming for. We were advised to avoid the Heiromiti shoal off Skorpios otherwise that was it.

As we were new to the sailing flotilla experience we assumed that we would set off together following the lead boat like ducklings. Far from it. The Sailing Holidays approach involves minimal supervision and James told us to leave when we were ready. How scary was that?

At this point we realised that an electric anchor winch is a mixed blessing. OK it saves the muscles but the chain was determined to jam up in the anchor locker and so the deck broom handle was an essential piece of kit for weighing the anchor. 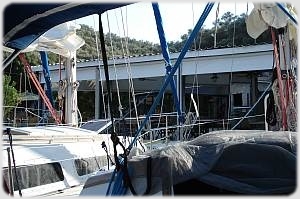 So we were off! Naturally a bit nervous so we motored most of the time but we did have a little go with the sails as it was not too windy.

We didn't risk stopping for lunch and went straight to Georges Taverna in Little Vathi on Meganisi where James was there to help us in and we first attempted the harbouring routine of Mr. S at the helm and Mrs. S in charge of the kedge anchor. I think we did rather well although we got into a muddle with putting the mooring ropes over the guard rail instead of under it. James was very patient. The rest of the sailing flotilla followed a bit later. 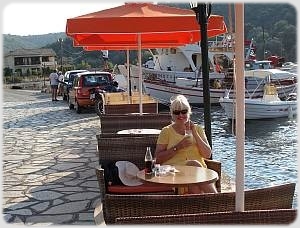 We explored the nearby town and Mrs. S found her favourite spot, the cocktail bar right on the harbour.

Back to Georges for the group meal. On all our previous holidays we have always pleased ourselves regarding meals etc. and at first we weren't keen on the idea of an organised 'let's all be friendly' meal.

But we went and it was a brilliant way to get to meet other sailing flotilla crew members who would become friendly faces to greet you at each stop and exchange notes about our adventures. 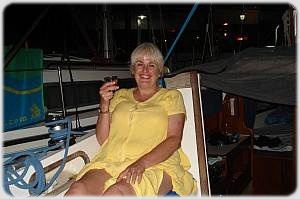 We had a brilliant sail this day. The wind was in a perfect direction and despite the fact that we didn't really know what we were doing, Kassos set up a cracking pace to Ithaka. This is what sailing flotilla holidays are all about.

We arrived at the island around lunch time and searched for a nice bay to anchor and have a swim and some refreshment. We gathered that it was the done thing.

However we soon discovered that we had no idea about anchoring techniques and after several fraught attempts and marriage jeopardising discussions we came on the brilliant idea of just stopping the engine, dropping the sails and drift. Well it worked for us!

We arrived at Port Vathi with no further problems and were a bit disappointed.

We were looking forward to landing on the Odyssean island with all its romantic connotations but the town was less than impressive.

However we felt pretty smug as our navigation was spot on. Unlike the crew on another yacht who missed Ithaka altogether and ended up in Sami on Kefalonia. So...

Next stop Sami to meet up with the wayward crew.

They were novices like us and their experiences highlighted the friendliness of the sailing community as when they arrived totally alone the night before, there was no shortage of assistance from other independent yacht crews already there. 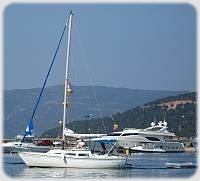 Sailed a bit up the bay to Ag .Ephemia where the sailing flotilla had a harbour party for a girl on one of the yachts who just turned 16.

What a great way to celebrate a birthday!

Today was a return sail back to Ithaka. We felt very confident as we had a good sail on the first day and every other one was easy going. So off we went, all sails up and doing fine

we went round the south of Ithaka and came out of the sheltered bit. The wind hit us and we felt like we were about to capsize. As we knew nothing about preparing a yacht to go to sea, we hadn't done simple things like shutting the hatches and securing the galley. As a result there was water and crockery everywhere. A yacht in a sailing flotilla can be a bit scary with lots of crashing noises coming from down below.

Somehow we managed to recover, put on our life jackets to give us more confidence and continued to Frikes. On reflection there was hardly any wind but we were not in total control.

That experience later inspired us to create a going to sea checklist for next time. 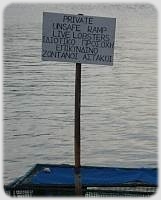 Frikes is our favourite harbour, with several good tavernas right on the sea. One in particular had fresh lobsters kept at the end of a small pontoon.

I wonder how many hundreds of photos of this sign exist.

That evening whilst eating there a huge wave came right in to all the tavernas. Was it a tsunami caused by an earthquake we asked ourselves?

Just a big ferry passing too close and fast, as they do.

It turned out that the wave the night before damaged one of the sailing flotilla yachts, so it was decided that while that was being sorted we would all stay another day in Frikes. This was put to great advantage by spending the whole time by the pool of a little hotel nearby. 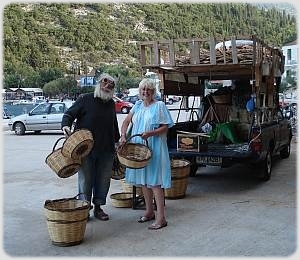 This is highly recommended as for only a few Euros we used all their facilities and ate lunch in the pool side bar. We had been going nearly a week and some little sailors were grateful for a 'day off'.

It was here that we bought the holiday souvenir (we always have one), a basket from an itinerant artisan. He was quite a character.

That was a brilliant half way point. See Flotilla Week 2 to read about the rest of our sailing flotilla adventure and how we won the sailing award.

Back to Sailing from Sailing Flotilla Week 1

Back to Greek Islands from Sailing Flotilla Week 1 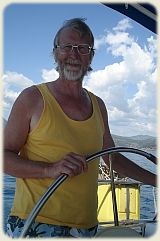